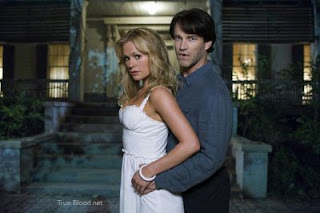 The second episode of True Blood aired last night on HBO and while not as packed with action or attitude as the first, it was still very good and kept my full attention for the entire hour.  Bill brought Sookie back by getting her to feed on his blood after her brutal beating.  Now all of her senses are more heightened, especially sense of smell.  Bill took Sookie out after meeting with her family at her house (much to the dread of her brother Jason).   Speaking of Jason, it would appear that regardless of the plot line, he will always have shirtless scenes and at least 1 scene per episode of him having sex.  Tara, who is quickly becoming my favorite character, continues to pine away for Jason.  Jason was released by the police after they showed him the video of him and Maudette having sex and at the end, after he leaves her apartment, she is still alive.  As to who killed her, we are still in the dark.  More drama & moping around by Sam as he tries the "friend"  route to stay close to Sookie.  At the end of the episode, Sookie goes to Bill's house only to find other vamps there and they think she's looking rather tasty.  I'm sure Bill will come to her rescue.
HBO has released the next 2 episode plotlines and they are below.  If you don't want to know what is going to happen, do not read any further.
***SPOILER***

Foiled in their attempt to “glamour” Sookie, vampires Malcolm (Andrew Rothenberg), Liam (Graham Shiels) and Diane (Aunjanue Ellis) make a hasty retreat after Bill lays claim to the waitress. At Merlotte’s, Sam seeks a short-term remedy to his long-term loneliness, while Tara seeks respite from her mother’s alcohol-fueled rage. Spurned by Dawn (Lynn Collins) for lack of performance, Jason turns to Lafayette (Nelsan Ellis), Merlotte’s short-order cook, for help with his problem.

Another killing in Bon Temps finds Jason back in custody with officers Andy (Chris Bauer) and Bud (William Sanderson). Tara gets him off the hook, but neither she nor Lafayette has the antidote to his current ailment. Urged by Gran to use her telepathic abilities to weed out the murderer and exonerate her brother, Sookie persuades Bill to take her to a Shreveport vampire bar called Fangtasia, where she impresses a dominant Nordic bloodsucker named Eric (Alexander Skarsgård) with her prescient powers. Later, Bill demonstrates his own considerable powers when an abusive patrolman stops the couple on their way home.