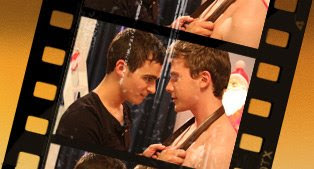 The 14th Annual North Carolina Gay and Lesbian Film Festival (NCGLFF) is the second largest gay and lesbian film festival in the Southeast, attracting thousands of patrons yearly. Since its beginning in 1995, the Festival has featured a diverse array of shorts, documentaries and feature films. The Durham Convention and Visitors Bureau named the NCGLFF a Signature Event for Durham, the highest honor bestowed on a cultural event or attraction by the organization.
The NCGLFF celebrates a worldwide glimpse of today's gay and lesbian life, helps bring the community together and features entertaining and sophisticated films and filmmaking. Visit The Carolina Theatre of Durham today for your tickets
Posted by Jeff at 10:21 PM 1 comment: