ACC Tourney and on to the NCAA's

Ok, I've spent the morning watching ESPN, reading the blogs and having my coffee. Sprinkled in among all the hoopla about bubble teams, who's going to get a #1 Seed in the NCAA Tourney and today's ACC Tournament Championship game have been some really humorous yet annoying Tarheel fan comments. It is amazing to me the audacity of unc fans and their inability to accept defeat graciously. Sure they report the 73-70 loss to FSU. But how do they handle it or how do they report it. They only refer to the fact that Ty Lawson did not play. They don't even consider that they just got beat. Back in January when they played FSU (and Lawson was playing) they barely squeaked by with a 3 point win. Give FSU their props. THEY BEAT you....fair and square. 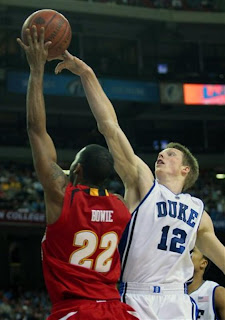 One blogger even went so far as to say.."now the practice is over and we can turn our attention to what's important and the National Championship". It breaks me up. Had they not lost, the ACC Championship would be like the "Holy Grail". It's only because they are not in it that it is now unimportant. If the ACC tourney was so unimportant, why suit up your starters for even the first game. Why not just throw the quarterfinal game and rest up everyone for the NCAA tourney??? Why, because an ACC Championship is a really big thing, unless you're a Tarheel fan and your team isn't it in. Come on people. Have a little grace...oh sorry, I forgot who I was speaking about. It's not in their cellular makeup. UNC fans never consider anything or anyone except that putrid shade of blue. Sore LOSERS. That's all. Today's DUKE/FSU ACC Championship game should be a good one. And I, as a DUKE fan, will be thrilled if Duke wins...but if they don't, good for Florida State. They've never had one and more power to them. But I won't have that dismissive UNC attitude like it doesn't mean anything. Tarheel fans, get off your high horse before someone knocks you off. Falling is much more painful.
Posted by Jeff at 10:53 AM