Reposted from Kenneth in the (212)'Modern' Warfare 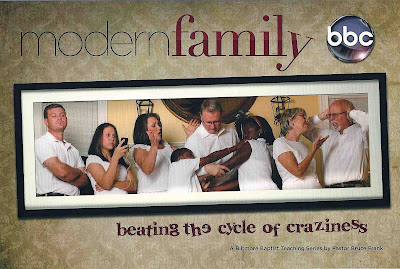 On Monday, I blogged about a megachurch in Asheville, N.C., that is modeling a campaign for a sermon series it is offering after the television show "Modern Family." A reader in the area, Mike, alerted me to a mailing that had gone out, and he expressed anger about a church that encourages discrimination against LGBT people trading in on the pro-inclusion themes of the ABC hit.

By Tuesday, Russ Bowen, a reporter for the ABC News affiliate WLOS had contacted me to see if I could put him in touch with Mike, and I'm happy to say it all came together, with Bowen filing this compelling report. While I'm not sure there is an actual "firestorm" of controversy brewing just yet, I think it's great that our concerns are being heard in areas outside of the major cities. 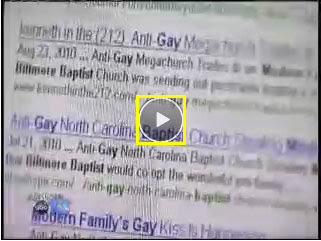 Click HERE to watch "Modern Controversy": Biltmore Baptist Church is using the "Modern Family" theme for a series of family oriented sermons. But, gay bloggers across the nation say the pastor there is twisting the ABC television show's theme of acceptance for its own purposes. The pastor says his church is not anti-gay but his church believes homosexuality is a sin.
Posted by Jeff at 10:49 PM